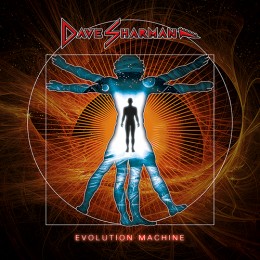 Evolution Machine is a Trans-Atlantic rampage of future Rock Guitar classics, blended with Funk and Eastern Influences. Dave’s signature finger tapping, impassioned guitar solos and vocals cascade onto each track, displaying both his sophisticated songwriting and technical brilliance. From the Rock ‘n’ Roll funk of ‘Hunger’ to the epic, indelible ballad ‘Lady’, the furious fretwork of ‘Hold Your Fire’, and the majestic ‘I am the Sun’ – there is something for all Rock fans on this album, including Dave’s unique take on The Cars classic ‘Just What I Needed’ and the space-age title track ‘Evolution Machine’.

Sometimes guitarists left to their own devices can go off on too many tangents, but here I think Dave Sharman has captured the balance of creative indulgence and cohesion very well. Most impressive!

This is a bold album, which for the most part takes the road less travelled. That in itself makes for an interesting journey.